"You will certainly enjoy mamet's marvelous use of language and the fine performances..." - Sally HOgarty, East Bay TImes

Since I started studying acting in 2000, I've always wanted to play male roles - they tend to be more proactive as characters and are more often the drivers of a play's actions. In particular, I truly love David Mamet's rich, morally challenged characters in Glengarry Glen Ross. There are no heroes in this play - only examinations of souls found throughout the ethical spectrum.  Women rarely get the chance to play these kinds of complex characters. An added draw for me is Mamet's mastery of dialogue - he is incredibly adept at capturing the crazy, realistic rhythms of modern conversations. His text is an enormous challenge to learn and deliver believably, but once actors get it, scenes start to sound and look like watching a great tango: two people becoming one fluid being. Despite the play’s darker themes, the agility in language can be uplifting, sometimes humorous, and downright fun to watch. At the beginning of 2016 when B8 was looking for brave projects that challenged society’s or art's preconceived expectations, an all-female Glengarry was an obviously great fit.

Then the Presidential election happened.

Last year’s campaign made it obvious that the ways in which we communicate as a culture have changed. Before we started rehearsals, cast member Maureen-Theresa Williams and I talked about how different the impact our production may have on our audiences given the current political climate. This is a gritty play with some very offensive, volatile language. Hearing women deliver it strips away possible allowances we may make for male speakers, and instead points up the impact that "locker room talk" and other vilifying content can have. Language has the incredible ability to alienate, objectify, incite, and diminish people, and the play certainly demonstrates the power of the spoken word. The work also does a fantastic job of studying the art of double-speak and the verbal shell game, which aim to persuade and disorient listeners. The more I looked at Glengarry, the more I saw it as being reflective of our society today. These parallels between art and life fueled my drive to take on Mamet’s work, and pushed me to finally realize my dream of directing Glengarry with an all-female cast.

It has been a fantastic experience directing these wonderful actors - they dug into these characters so readily, and have unflinchingly tackled the play's tough themes and complex language structure. I'm blessed and forever grateful to have such an emotionally intelligent, courageous, and open cast. I can't imagine a more fulfilling directorial debut than this one, and hope our work both entertains and challenges you. 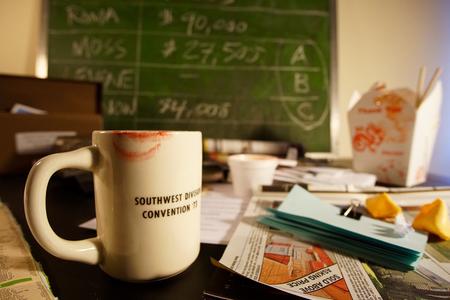