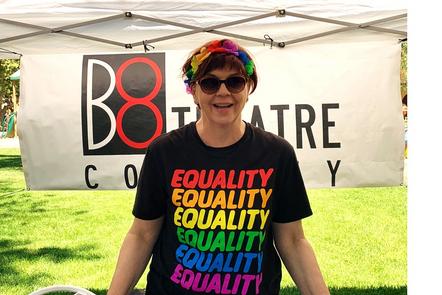 JanLee received her Bachelor’s degree in Theatre from Ohio Wesleyan University and her MFA in Dramatic Art from the University of California, Davis. JanLee’s broad experience in theatre encompasses the roles of actor, director, teacher and administrator, fulfilling these in a spectrum of companies and academic institutions nationwide. Most recently JanLee wrote, directed and performed in her one-woman show, Indecency (& and Other Bawdy Bits), exploring the public and personal life of Mary Frith, a.k.a. Moll Cutpurse.

Over the last 25 years JanLee has directed over 30 productions. She served as an Actor/Educator with KEY Players of North Carolina and Kaiser Permanente’s Educational Touring program in the Washington, DC region. JanLee’s passion for Theatre Education led her to teaching, directing and administrative positions with Florida Studio Theatre, Artz for Kidz, Montgomery Blair H.S., California Theatre Arts, The Meher Schools, and as an Associate Instructor at UC Davis. JanLee’s background as actor, director and instructor reveal a deep appreciation for working in multiple genres and a passion for collaborative and devised performance.

JanLee is a graduate of the Ringling Brothers Barnum and Bailey Clown College, and although rarely seen “in face” these days she brings her love of clowning and comedy to life throughout her theatrical endeavors. JanLee is most excited by collaborating with theatre artists who believe that theatre can change the world. Let us support one another and make theatre that draws us to listen with heighten attention and respond in mind, body and spirit as theatre makers and audience.